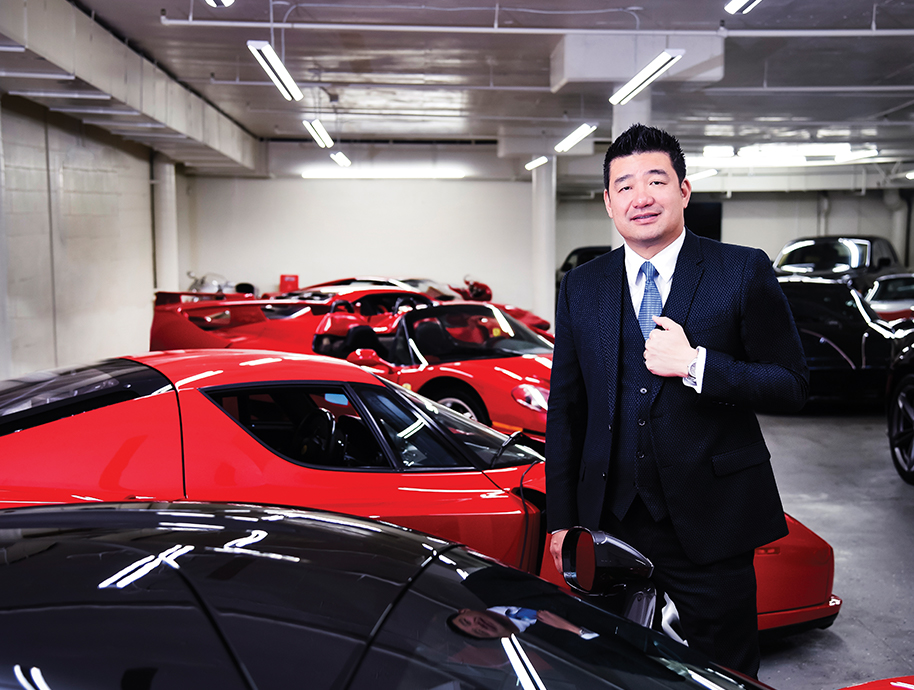 What makes an American entrepreneur? We have found six major characteristics in every entrepreneur that we have interviewed and featured: Family. Education. Vision. Passion. Focus. Hard Work.

Their economic success crosses every industry and their individual stories are different within the six characteristics. But the core of each one is the same.

Selecting David Lee as the 2017 Asian American Entrepreneur began with evaluating and digging deep into his six entrepreneurial characteristics. There has been a lot written about David and his social media presence is extensive, but they’re merely about his love and passion for car collections and fine watches – the fruits of his labor and the foundation of his family business.

But what hasn’t been told and uncovered is “David the person”.

David Lee is Chairman and CEO of the family business, Hing Wa Lee Group, headquartered in the San Gabriel Valley. He arrived in California when he was seven years old from Hong Kong where his father was a Gem Stone Carver. His father started the company in 1965, and it evolved to a wholesale jewelry company in the 1980’s.

David joined the company in 1990 and changed the business model into high-end retail, bringing in the finest watches and other luxury products to grow the retail business. Today, the two San Gabriel Valley retail stores are recognized by the fine watch industry as the leading and most prestigious in the United States. The Flagship Store was built and dedicated to his late father, Hing Wa Lee, as a legacy and honor to the family patriarch. The deep family values continue with David and his wife, Katherine, and their two children.

“When I arrived here in the United States it was quite a cultural shock” explains David. “As I grew up here in San Gabriel Valley, there weren’t a lot of Asian and Chinese families. Now we are experiencing a major transformation of various Asian cultures and people from China and Southeast Asia.” 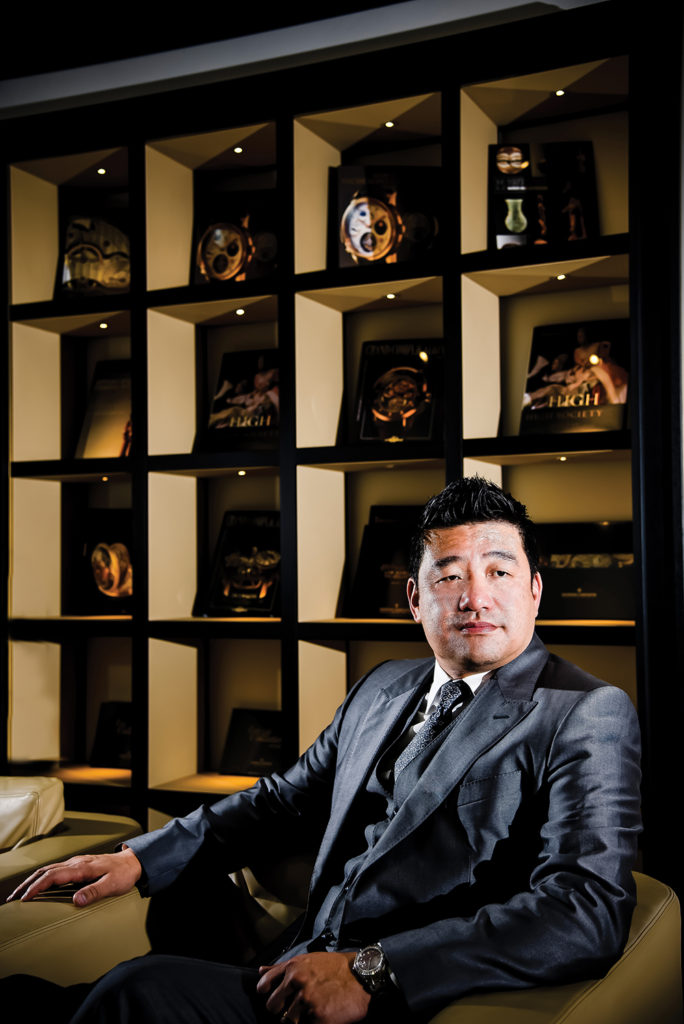 San Gabriel Valley is “Trojan Country” and David is deeply rooted into the USC fabric. “I’m fortunate to have been able to attend one of the greatest schools in America, USC. My daughter is there, and my son wants to go to USC. It’s a family tradition being part of a great American institution such as USC.”

David is Chairman of the David SK and Katherine Lee endowment program for leadership development at Flintridge Preparatory School. He is also very involved with various philanthropic groups and other organizations that help people. David is a Board Member of SPARC (Student Philanthropists Advancing Real Change), received Sing Tao Media’s 2014 Philanthropy Award, and attained Eagle Scout rank in the Boy Scouts of America.

“I learned a lot at USC. Later on, I was invited to join the XO Club founded and chaired by Andrew Cherng of Panda Express. There, I met another member, Dominic Ng of East West Bank who recruited me to join YPO (Young Presidents Organization). From that experience, I wanted to start my own organization for Chinese/American entrepreneurs.”

Eight years ago, David founded and became the Lifetime Chairman of the LA Asian CEO Club. “It’s like a hybrid of the XO Club and YPO; I took the best parts of each to form my own CEO Club made up of entrepreneurs, business owners, 1st generation, 2nd generation, from Taiwan, China, Hong Kong, and Southeast Asia. All Chinese in heritage, and we come together as a group to do good in the community, to learn from one another, and to do life together.”

As the Pacific Rim Luxury Economy is changing the face of Southern California, David understands the roots of this change. “The people in China and the government change quickly, whether it’s government policies or consumerism, and in the taste and products they want to consume. One thing I do know, and being so in touch with this market, is that they like California, especially Southern California. They want to be here, they want to live here and have their family and future here. And they would like to invest here. They want to do business here,” enlightens David. “If you were to remap Southern California, from an Asian perspective, it’s one region of Los Angeles, Orange County and Las Vegas. It’s all one big region and one market for the Chinese.” 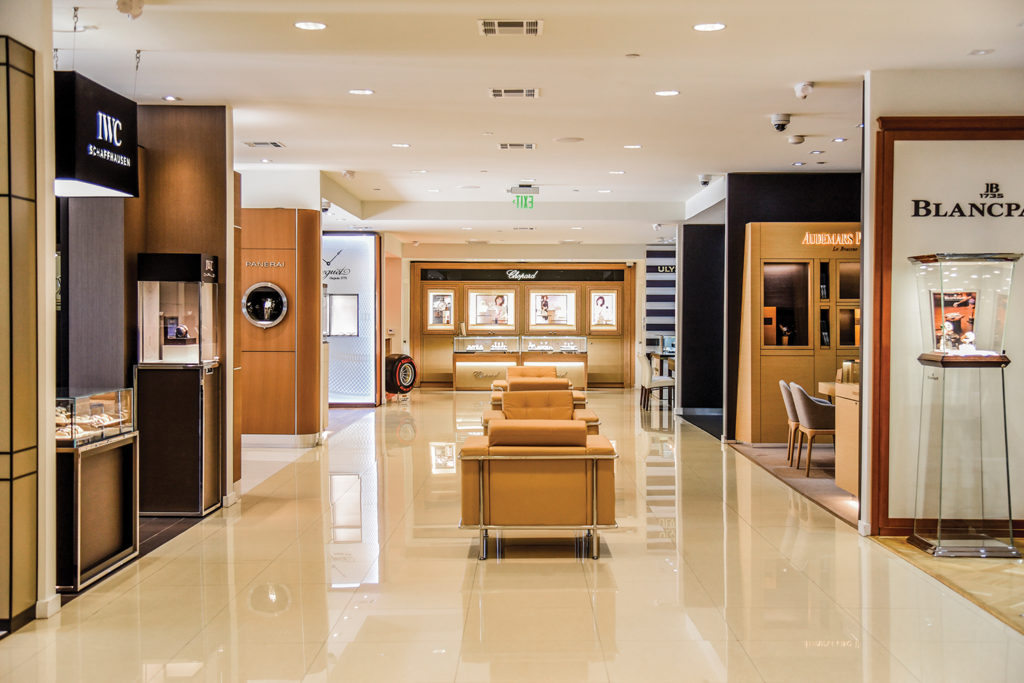 Hard work does pay off. It provides for expanding into other personal interests and oftentimes directly connected to an entrepreneur’s core business.

A story which expresses David’s work ethic and level of focus is when David tells of how he once went after a brand for 23 years before they finally said yes, noting that you must never give up on your dreams. This is a man with exceptional focus and perseverance.

Hing Wa Lee has had the Top Sales Volume of all independent Rolex authorized dealers since 1995 and was named Top 10 Best Retailers in America by Leading Watch Retailers.

“We’re fortunate to have a great community and a great market base where our stores are located. We invest a lot of money in our business, especially in the buildings we house ourselves in. For example, in the 15,000 sq.ft. San Gabriel store – the largest in North America – we have cutting-edge consumer experiences,” says David. “I recognize that some luxury watch buyers have not experienced coming to Hing Wa Lee Jewelers in San Gabriel because they are not familiar with the area, or think only of West LA for luxury.” 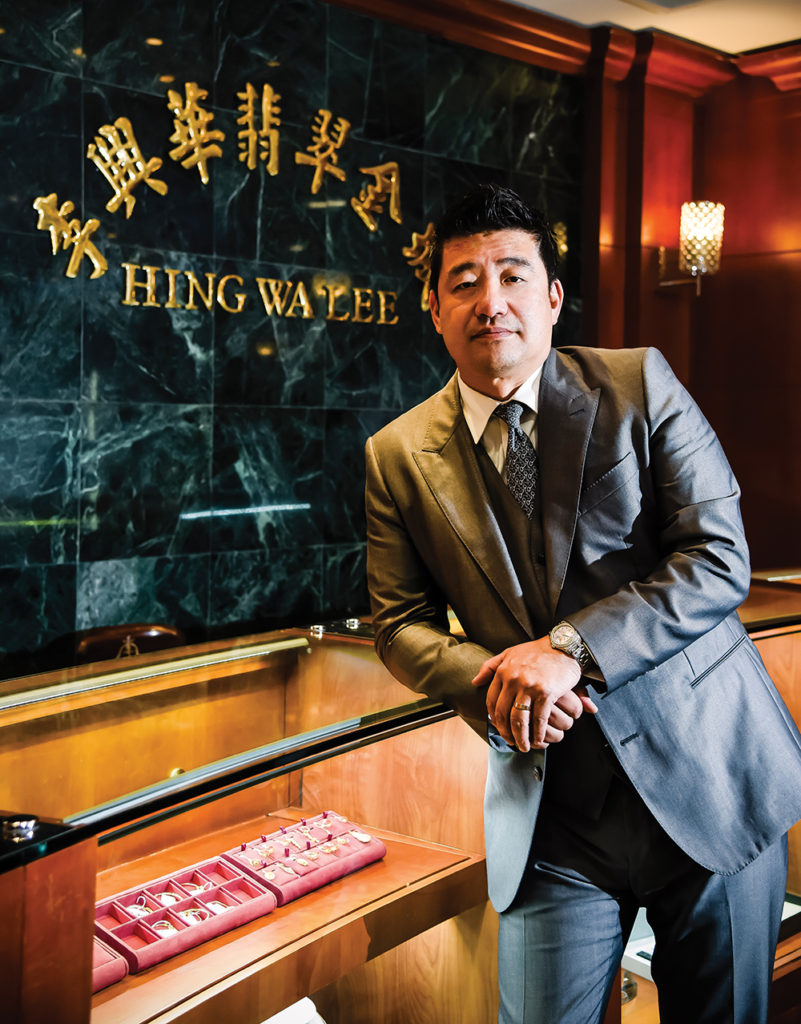 “It’s kind of an occupational hazard in the jewelry and watch business. You learn the finer things about life and the world around you. You begin to see things in this way, and you develop a taste for finer things. I’ve always loved cars, I’ve always been a car guy. I’ve always had a love of cars and always looked at the magazines to see what they were talking about,” explains David.

Five years ago, David jumped into car collection as both a hobby and investment strategy. “I went to a friend’s house and he showed me a classic car that he had purchased, and I decided that I wanted to purchase one. Now that I’m older, I thought the timing was right. In the research of getting that car, which I eventually got – a 1965 275 GTS – I discovered the wonderful world of Ferrari. The brand, the heritage and the appreciating value that these cars have is tremendous.”

His extensive car collection is part of the family business investment division. “As a business man, you want to make wise decisions. So just like collecting art, the beauty of it is that not only can you admire looking at it, but you can be engaged and drive it. And if you do it right, the cars appreciate in value,” David instructs.

Selecting David for the 2017 DREAMS Inspiration Entrepreneur Award went far beyond his success in selling luxury watches and collecting rare autos. These two accomplishments are merely part of the story of a true American entrepreneur. Each of the six characteristics of a person must be evaluated and understood. In the end, having a dream as a young seven-year-old immigrant and achieving that dream is the story of success.