The Summerlin Top 10: Why Southern Nevada’s Premier Community, Now in its 30th Year, is Better Than Ever 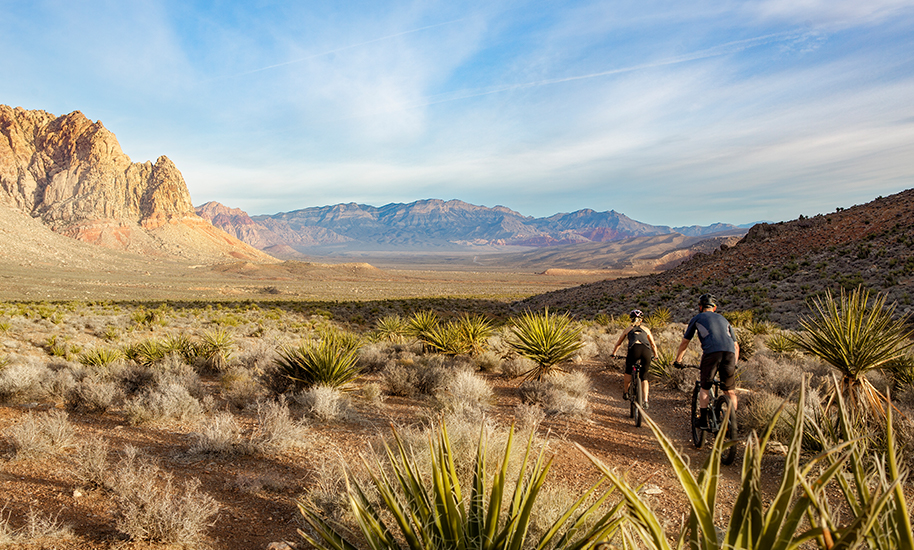 When Howard Robard Hughes, Jr. purchased a barren piece of land along the western edge of the Las Vegas Valley in the 1950s, he most likely never envisioned what would become of his small investment in Southern Nevada, then considered an outpost in the desert for gambling and flashy fun.  Urban folklore says he spent a paltry $3 per acre, a grand total of $75,000 for approximately 25,000 acres – land that is today considered among the most valuable and desirable in Las Vegas – today known as the Entertainment Capital of the World and visited by more than 42-plus million tourists each year.

In the mid-1980s, executives with Summa Corporation, the company which then controlled Hughes’ assets, began making plans to develop the site as a master-planned community the likes of which did not yet exist. By 1990, early development was well underway for Summerlin, a community named for Hughes’ grandmother, Jean Amelia Summerlin. In 1991, the first family to pioneer living along the western rim of the valley, had settled in.

Today, Summerlin, now marking its 30th year, is as vibrant as ever and home to approximately 100,000 residents. It is considered the preferred place to live for the city’s influencers, CEOs, celebrities, professionals, athletes and families all seeking the same thing: an active, outdoor lifestyle; a stunning natural setting at the base of Red Rock Canyon National Conservation Area; incomparable amenities; and homes in a wide range of styles, sizes and prices by the nation’s premier builders.

Though Hughes passed long before the community’s value began to be realized, Summerlin today stands as the definitive example of a brilliant investment with a vision that has exceeded all expectations. Ranked as the nation’s #1 best-selling master-planned community for nearly a decade from the early 1990s to the early 2000s, Summerlin is still easily landing on the best-selling list year after year. In 2019, Summerlin ranked #3 nationally – not bad for a community now entering its fourth decade.

Most importantly, Summerlin helped Las Vegas to become more than just a great place to visit.  The community helped to set the standard for quality of life in Southern Nevada, a region now considered one of the country’s best places to put down roots.

Take a look at the top ten reasons why Summerlin continues to dominate top-selling lists, make headlines, win awards and resonate with those seeking their dream home in a community that offers a lifestyle second-to-none in Southern Nevada.

Nestled in the foothills of Red Rock Canyon National Conservation Area, Southern Nevada’s most stunning natural landmark and a world-class destination for cycling, hiking and rock climbing, Summerlin is synonymous with the area’s beauty.  In fact, the community’s logo is a mirror image of the ridgeline that serves as its backdrop. Of note is the fact that The Howard Hughes Corporation’s predecessor, Summa Corporation, helped to establish the boundary for the Conservation Area to forever protect Red Rock Canyon from development. In a landmark exchange with the Bureau of Land Management, the company helped to create a buffer zone in the late 1980s, well before Summerlin development began. 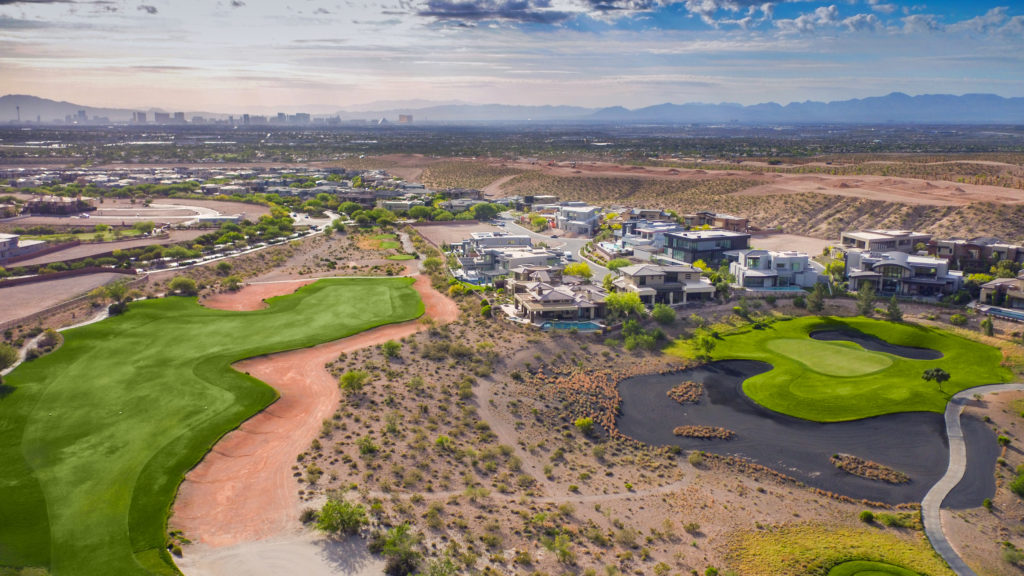 A view of the Las Vegas valley from The Ridges and Bear’s Best Las Vegas golf course.

Summerlin is about 3,500 feet above sea level – with areas of the community topping out at more than 4,400 feet. The higher elevation delivers amazing views from scores of vantage points throughout the community, a significant benefit of literally living above it all. The higher elevation also delivers cooler temperatures of about five to seven degrees as compared to other parts of the valley. During the heat of the summer, that can be a real difference-maker. Cooler temperatures also support a wider variety of naturally-occurring vegetation, visible in the natural desert areas near Red Rock Canyon.

Many of the nation’s top homebuilders are actively developing homes in Summerlin, creating a literal “house beautiful” showcase throughout the community. Pictured here is the Quartz model at Granite Heights by Toll Brothers.

Summerlin’s all-star roster of national homebuilders has long been a part of the community’s development mantra, ensuring that quality, innovative, and progressive home design remains a community hallmark. In fact, the list of national homebuilders in Summerlin includes many of the country’s largest and most successful builders as ranked by ProBuilder.com for 2019: Lennar (#1); PulteGroup (#3); Toll Brothers (#4); KB Home (#6); Pardee Homes (parent company TRI Pointe Group #9); Richmond-American Homes (parent company MDC Holdings #10); Shea Homes (#12); William Lyon Homes (#16); and Woodside Homes (#25).  Discovery Land Company (DLC), the nation’s premier developer of luxury estate communities, is also active in Summerlin.  In a joint venture with The Howard Hughes Corporation, DLC is developing The Summit, the most exclusive community in all of Las Vegas. 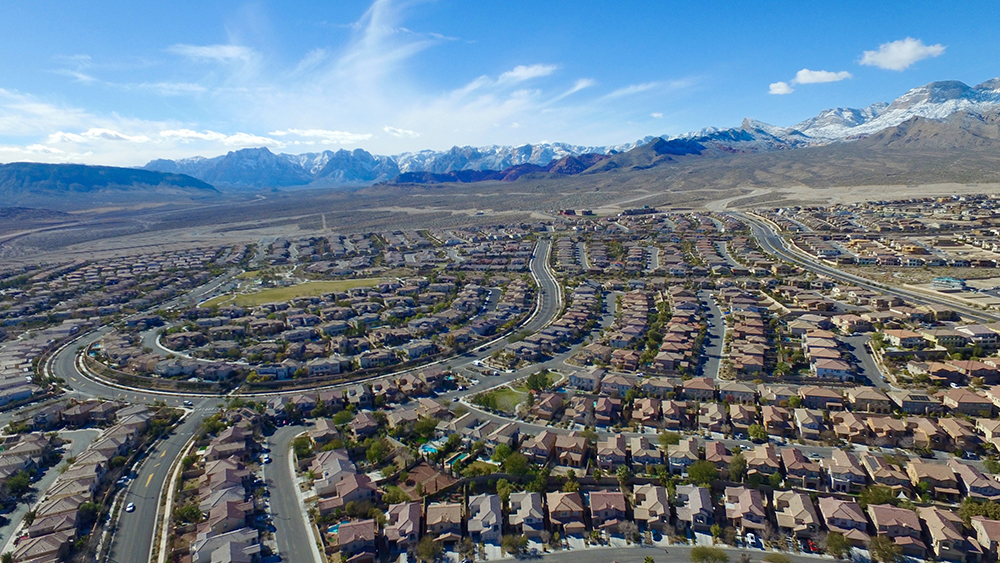 Summerlin is a multi-generational community offering homes in a wide range of styles and price points.

4- A Home for Everyone

A variety of gorgeous homes in all styles and price points is just one reason why the community has held its value and appeal through the years. Summerlin currently offers more than 160 actively selling unique floorplans in 36 neighborhoods throughout nine distinctive villages, priced from the low $300,000s to the millions. Homes in Summerlin run the gamut from expansive estate-style and luxury custom residences to a diverse range of detached homes in multiple elevations for families of all sizes. A variety of attached homes, from townhomes of all sizes and price ranges to luxury apartments, are ideal for multi-generations – from millennials to empty-nesters and active adults. 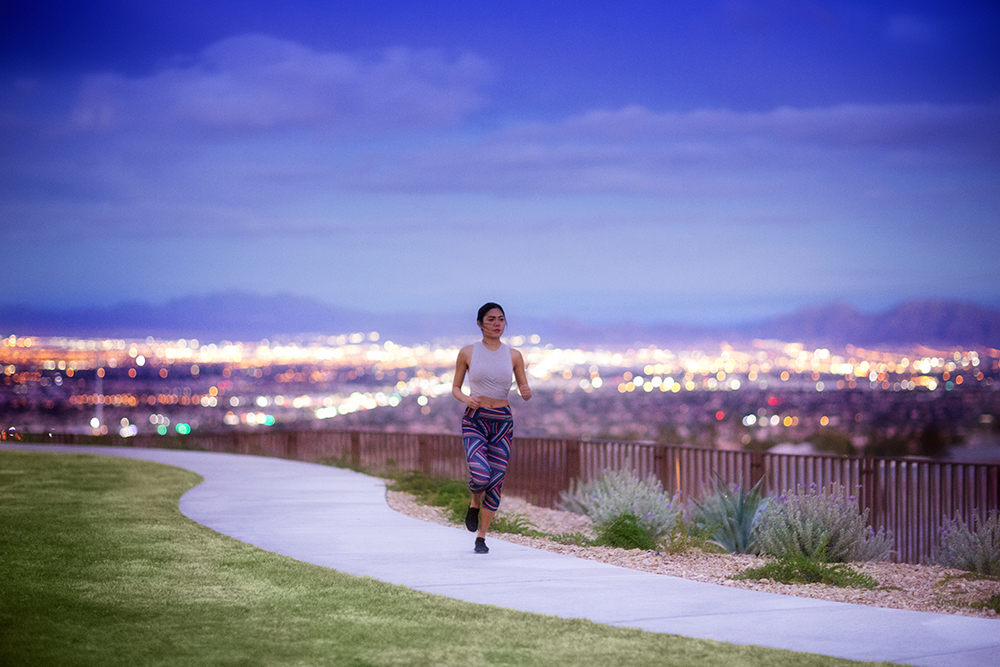 With more amenities than any other Southern Nevada community, Summerlin is synonymous with an active, healthy and outdoor lifestyle.

It’s easy to stay active in Summerlin thanks to the community’s abundance of recreational amenities. This includes the community’s award-winning trail system that offers more than 150 miles for walking, running and cycling; more than 250 parks of all sizes that are home to tennis/pickle ball/basketball courts, baseball and softball fields and playgrounds; five community swimming pools; community centers for socializing and gathering, ten public and private golf courses, including the state’s only two Tournament Players Club facilities; and, of course, nearby rock-climbing, cycling and hiking at Red Rock Canyon. The community’s social infrastructure is bolstered by youth and adult sports leagues, camps and activity classes for all ages. 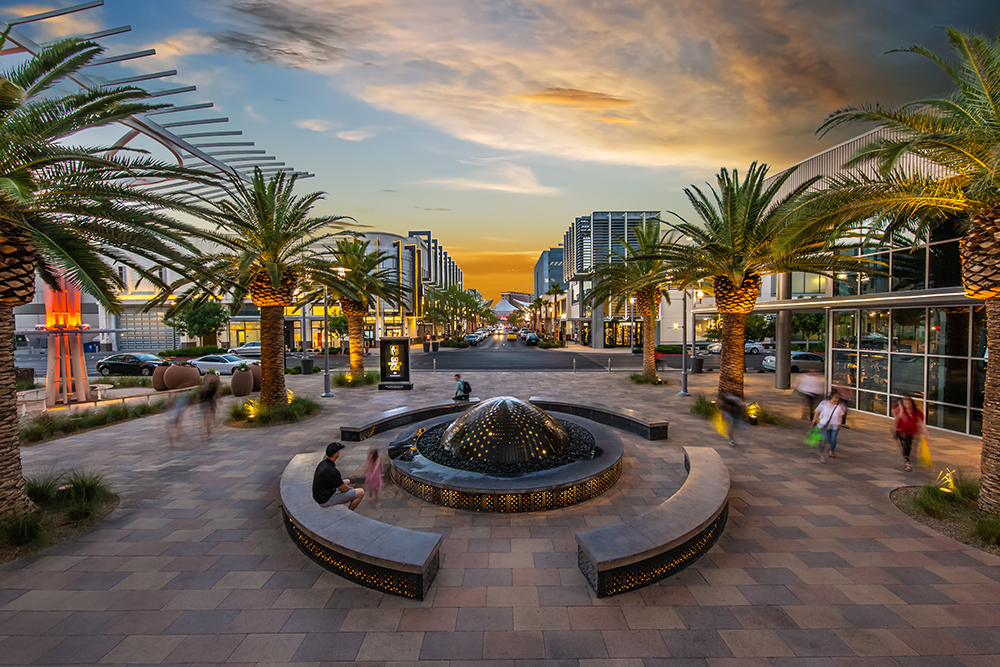 Summerlin is the only Southern Nevada community with its own downtown and a hot spot for shopping, dining, entertainment and sports.

While Summerlin is exceptional for many reasons, the fact that it has its own downtown puts the community in a league of its own. Opened in 2014 to critical and public acclaim, Downtown Summerlin includes an outdoor pedestrian retail center home to 125-plus national and regional brands, 30-plus restaurants and eateries from fine dining to fast casual, movie theatres, major sports venues and more.  While Downtown Summerlin has easily become the go-to shopping and dining spot for those who call the community home, it’s also a popular gathering place for nearly everyone in the valley thanks to accessibility via the 215 Beltway.  Downtown Summerlin is where the community’s families are making memories at annual Halloween and Holiday parades, where they enjoy summer evening concerts, attend fitness classes on the lawn and shop at weekly farmers markets. What’s not to love? 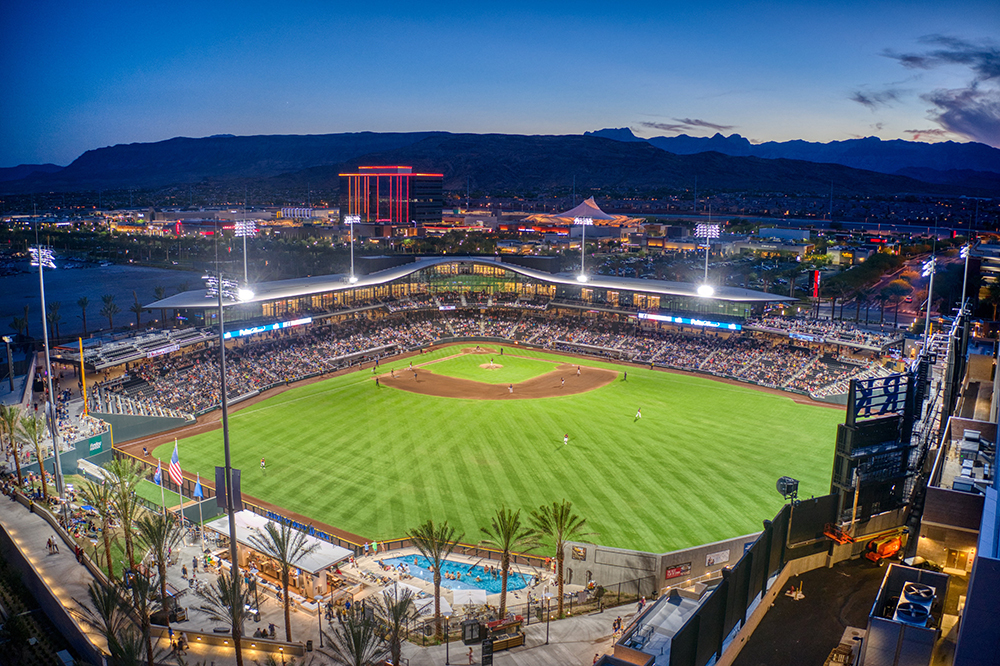 Las Vegas Ballpark, home of the Las Vegas Aviators, is one of two professional sports venues at Downtown Summerlin.

The newest star in Las Vegas is easily professional sports with the recent arrival of the National Football League, National Hockey League, Women’s National Basketball Association and United Soccer League. And Downtown Summerlin boasts not one, but two professional sports facilities: City National Arena – practice facility of the Vegas Golden Knights; and Las Vegas Ballpark® – home of the Las Vegas Aviators®, professional Triple-A baseball team of the Pacific Coast League (PCL).  The Knights, which took the city by storm during their inaugural season in 2017-18, beat all the odds in true Las Vegas fashion by going all the way to the Stanley Cup Finals. Team members, now the darlings of Summerlin, can be spotted out and about in the community where they, too, live and work. Similar to the Knights, the Las Vegas Aviators wrapped up a multiple award-winning season in 2019 at their new state-of-the-art minor league stadium, ultimately finishing as the PCL Southern Division champions. Leading Triple-A baseball in home attendance with 47 sold-out games, Las Vegas Ballpark was named by Ballpark Digest, the industry standard, as the “Best New Ballpark of the Year.” With both pro hockey and baseball converging in Downtown Summerlin, the area is now a hotbed of sports and fun. 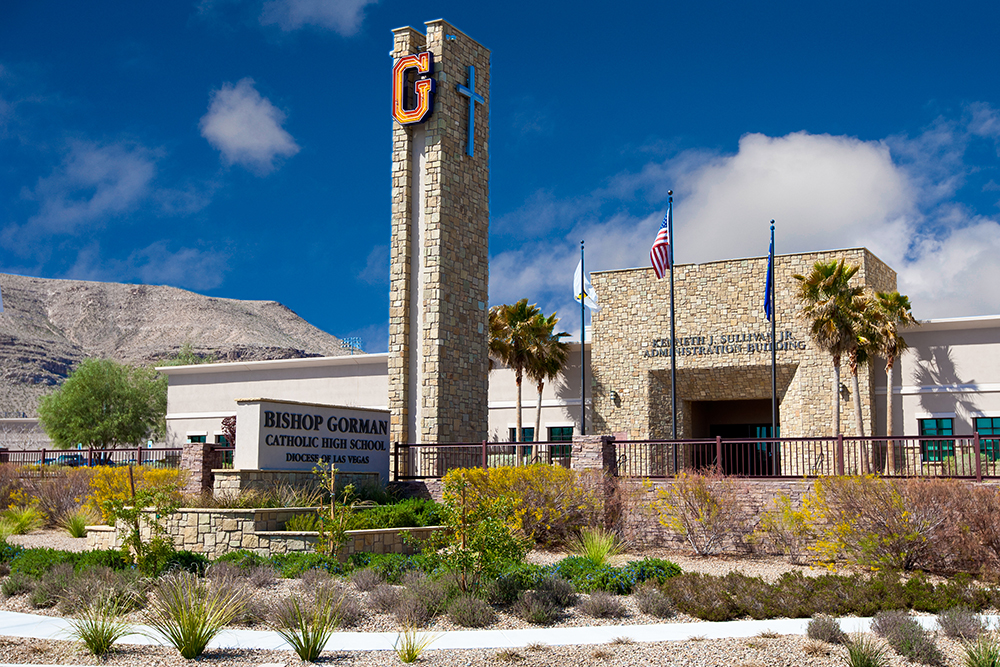 Bishop Gorman College Preparatory School is one of 26 schools in the community. From inception, Summerlin made the development of schools a top priority.

Recognizing that schools are foundational to community, The Howard Hughes Corporation made schools a priority from Summerlin’s inception. In fact, the very first building in the community was The Meadows, a college preparatory school now in its 36th year and built on land donated by The Howard Hughes Corporation. Today, the community is home to 26 schools, including the valley’s top-ranked public schools, many of its premier private schools, and a growing number of charter schools. 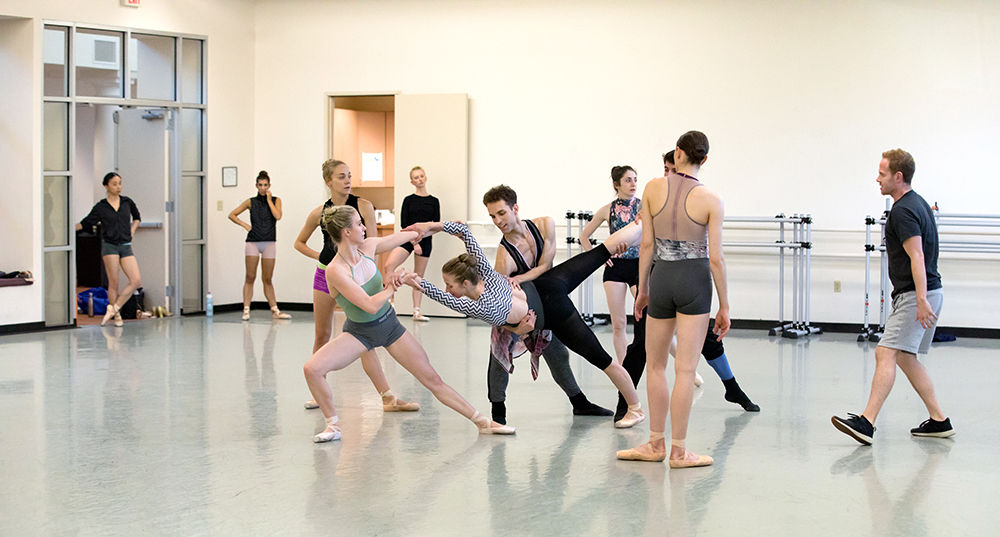 9- A Community of Culture, Amenities

To access a variety of cultural amenities and services, Summerlin residents don’t need to leave their community. The Summerlin Library and Performing Arts Center features a community theatre, so popular it’s booked more than a year in advance. Next door is the Donald W. Reynolds Cultural Center, home of Nevada Ballet Theatre, marking its 48th year as the state’s oldest performing arts organization. Fourteen houses of worship representing a dozen different faiths allow Summerlin residents to worship at a church or temple of their choosing close to home. Summerlin Hospital Medical Center is a 454-bed acute care hospital, providing premier healthcare minutes from home; and Cure 4 The Kids Foundation, a division of Roseman University of Health Sciences, provides comprehensive treatment for pediatric cancer patients – right in the community.

Sidewalks with tree-lined streets, beautifully manicured streetscapes designed with the desert environment in mind, outdoor signage restrictions, street and trail lighting that points downward to minimize nighttime glare and light pollution, carefully curated plant palettes, colors that blend with the environment, and design standards that require four-sided architecture on all homes, are just a few of the standards that keep Summerlin looking clean, beautiful, modern and peaceful.   The community’s high design standards are created to complement its natural surroundings. In fact, Summerlin has long fostered a culture of environmentally sensitive development as one of the valley’s earliest adopters of desert landscaping and the first community to implement strict Water Smart conservation guidelines. A number of design innovations include the preservation of natural drainage areas and arroyos that serve a dual use for parks and trails.  The bottom line? Summerlin looks the way it does because of its commitment to preserve as much open space and natural vegetation as possible.

In Southern Nevada, Summerlin has no equal. Check it out for yourself at www.Summerlin.com.