Scotch 80 Prime: Quest for the Best in Scotch & Whiskies 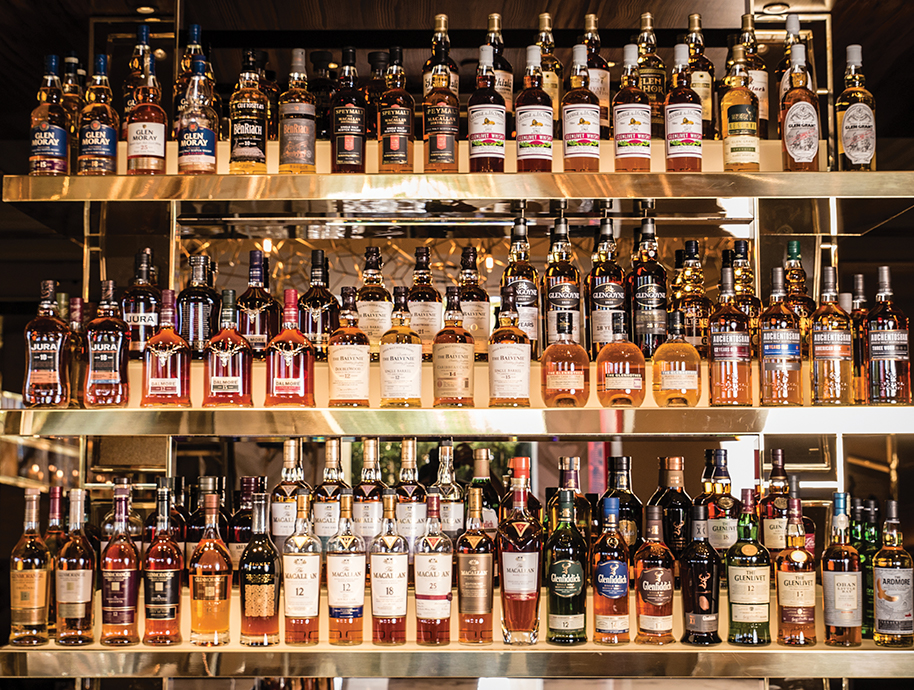 This premier steakhouse also features one of the largest – and most expensive – collections of high-end rare scotch whiskies for consumption from top producers in Scotland, that includes The Macallan Fine and Rare vintage collection, all with an estimated in-house value of over $3 million.

The grand opening also presented a unique opportunity to talk with the restaurant’s Scotch Master, Cody Frederickson, that oversees the prestigious whisky program at this new luxury dining destination. His 14-years of experience in the realm of ultra-expensive premium spirits provided valuable insights on today’s burgeoning quest for experiencing the very best of rare and old collections.

Today, both scotch and whiskies in general are becoming increasingly popular. We asked Frederickson for his views on this high-visibility transition. “In my opinion, in the 1980s and 90s vodka was king,” he notes. “However, it was almost devoid of flavor and America’s tastes and palate at that time favored overly sweet mixed drinks and cocktails.”

“Since that time,” he continues, “the culinary scene has grown and along with increasing sophistication, the American palate has begun appreciating different unique and exotic flavors as well, and that’s where whisky takes over.”

“The current generation cares more about the quality of the spirit,” he adds, “and also the history… and scotch whisky has such a rich and intriguing heritage that enhances the experience even more.”

Today, there are scotches and whiskies with prices ranging from tens of thousands per bottle up to nearly anything imaginable. For example, a recent auction in Hong Kong saw the sale of two bottles of extremely rare scotch whiskey that sold for $1 million apiece. That was topped just last month, with two more sales. First, a bottle of 60-year old Macallan Peter Blake 1926 whisky went for $1.01 million and a second bottle, a Valerio Adami 1926 vintage, sold just a few hours later for a staggering $1.1 million, making it the most expensive bottle ever sold at auction.

Frederickson notes, “The Asians have their own unique history of pursuing, purchasing and collecting high-end scotches and bourbons, but here in America, today’s growing interest in older rare scotch and whiskies comes down to experiencing history in a glass.”

He observes that, much like a song from your past that takes you back to another place and time, a rare scotch from a given period offers a unique opportunity to experience a real connection with a specific time or event of importance in one’s life.

“It could be one produced and bottled in the year you were born,“ he notes, “or be a desire to taste the subtle difference in a Macallan scotch produced during World War II, when they had to use peat rather than coal for distilling, that may be of special significance to a veteran who served in that era.”

While these establishments offer scotches and whiskies ranging from the very traditional and affordable to the exorbitant and astronomically priced rarities, we asked what a typical upscale choice and celebration might look like at the Scotch 80 Prime.

Frederickson noted The Macallan 40, a limited release 40-year old scotch, that can retail anywhere from $15,000 to $20,000 a bottle, if you can find it. Often, it can only be purchased on the secondary market and for substantially more.

At Scotch 80 Prime, a couple celebrating their wedding anniversary may want to experience a luxury spirit from the year they were wed. After weighing various options presented by Frederickson, their expert whisky sommelier, they may choose the aforementioned Macallan 40 for example, and could each savor a two ounce pour for a tidy $1,870 apiece, or $3,740 total. Well worth it to some, who can both afford it and are wanting to renew their vows with a noteworthy trip down memory lane taste-wise.

More so, had they opted to delve into a taste from the super-exclusive Macallan Fine and Rare vintage collection, only a one once pour would be offered and the price would come with even more of a price tag.

There is much to be learned about ultra-expensive premium spirits. There are different types in the production of scotch and whiskies, such as age statements and special flavor blends, and both availability and various types of upscale bottling or decanters come into play as well.

In future issues, we will delve further into the world of ultra-expensive luxury spirits – ranging from rare vodkas and exclusive tequilas to exotic rums and vintage champagnes. Hopefully, we’ve at least initially whetted your interest in one day sampling a rare vintage scotch or whisky.

Regardless, the luxury spirits experts at the growing number of establishments in Los Angeles, Las Vegas and worldwide – like Scotch 80 Prime – are there to ensure that you fully enjoy every bit of rich history that they place in your glass.

Reimagined Fantasies at The Palms