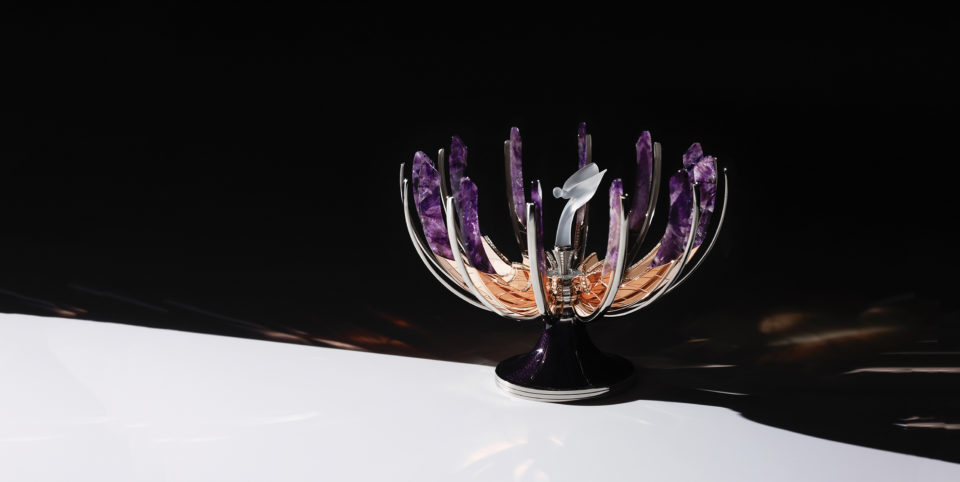 From Kings and Queens to Entrepreneurs, many of the most prominent and wealthy collectors of the 20th and 21st century have been beguiled by the lure of a Fabergé Egg. With just 50 pre-1917 Imperial Eggs completed, these exceptionally precious creations are some of the most valuable and coveted objects ever to have been made.

Now, in a contemporary fashion, a new Fabergé Egg has been created. Two of the world’s most esteemed houses of luxury have joined forces to create one unique objet d’art, for one discerning patron. Rolls-Royce Motor Cars and Fabergé proudly announce the ‘Spirit of Ecstasy’ Fabergé Egg.

For the first time in history, an iteration of the Spirit of Ecstasy, the enigmatic mascot that has adorned Rolls-Royce motor cars since 1911, is cocooned in an exquisite, contemporary, Fabergé Egg. The design, conceived by Rolls-Royce Designers Stefan Monro and Alex Innes and rendered by Fabergé Lead Designer Liisa Talgren, has been brought to life by Fabergé workmaster Paul Jones, creating a contemporary interpretation of one of the world’s most fabled and prized possessions.

Indeed, this ‘Spirit of Ecstasy’ Fabergé Egg, the second to be commissioned in the ‘Imperial Class’ since 1917 – a category reserved only for Fabergé’s most illustrious creations – celebrates the history, heritage and legend for which both Rolls-Royce and Fabergé have been revered over more than a century. Both brands have navigated the vicissitudes of time and continue to produce the apogee of modern, highly sought after, true luxury items. The Egg is destined for the residence of a great collector of both brands.

The Egg connects the elements that lie at the very core of each marque – the Spirit of Ecstasy, the illustrious muse that has guided each Rolls-Royce motor car for over a century, and the form of a Fabergé Egg, the pinnacle of ornamental expression. The masterpiece resulting from this distinguished collaboration reflects the extraordinary attention to detail and the consummate craftsmanship for which both brands are renowned to this day.

Torsten Müller-Ötvös, Chief Executive Officer, Rolls-Royce Motor Cars, commented, “’The Spirit of Ecstasy’ Fabergé Egg was born from an intrinsic desire to further the realms of Bespoke personalization. Responding to the continuing demands of patrons in search of unique and cherished possessions, a designer at the House of Rolls-Royce sketched an Egg, igniting a fascination that will undoubtedly become one of the most collectable items of modern times.” 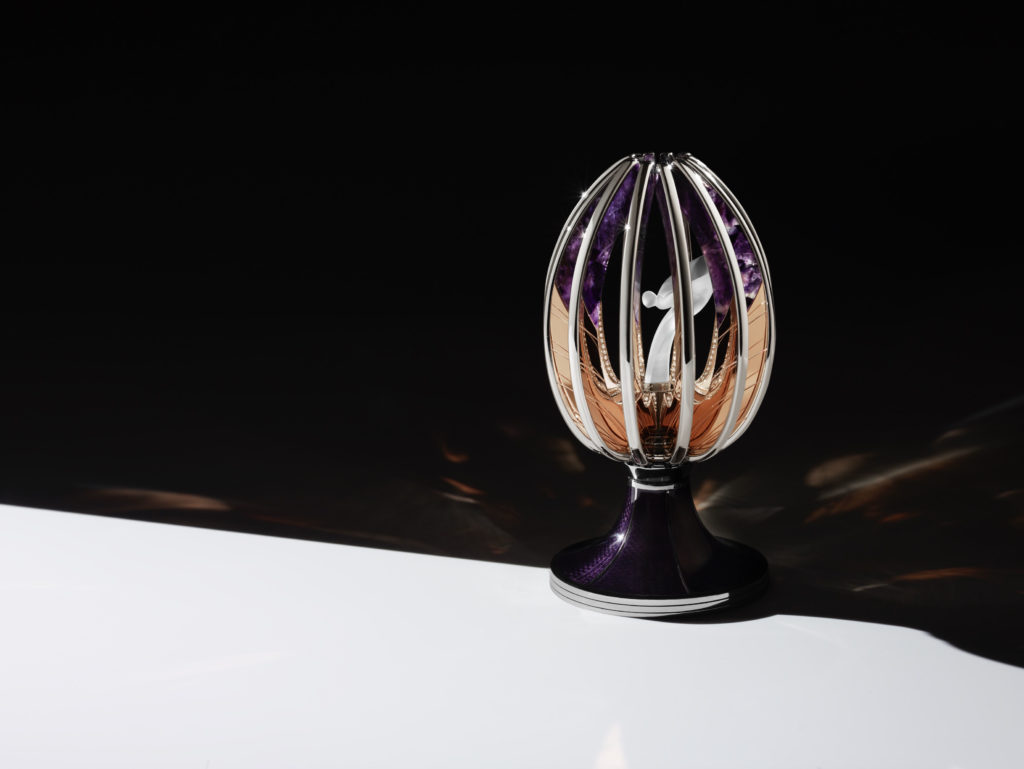 A team of seven craftspeople from Fabergé undertook the challenge of fabricating the design using the finest materials married with their extraordinary skill as artist jewelers. At first glance, the Egg is unmistakable in its character. Design cues from Fabergé’s heritage are masterfully woven into the intricate design which stands at 160mm and weighs just 400g, with the Egg harnessing the ‘surprise and delight’ attributes for which Imperial Eggs are celebrated.

The Egg rests on an engine-turned, hand-engraved, purple enamel guilloché base of 18 karat white gold. Arms of rose gold define the shape of the Egg, acting as a protective chamber for the Egg’s precious inhabitant. Upon operating the movement via a discreet lever at the base of the stand, a sense of theatre ensues as the boughs open to present the fine figurine of the Spirit of Ecstasy, hand-sculpted in frosted rock crystal, standing nobly in her opulent surrounds. The rose gold vanes, embellished with nearly 10 carats of round white diamonds, resolve into swathes of natural amethyst weighing over 390 carats, specially selected for its color saturation and quality. The purple hue of the enamel and amethyst provide a playful nod to the use of color found in Fabergé’s heritage.

The technical mastery of Fabergé prevails. The ‘Spirit of Ecstasy’ Fabergé Egg adopts a highly complex operating mechanism, conceived through computer aided design and animation, developed with micro engineering. The success of this mechanism, and in turn the piece as a whole, can be attributed to the goldsmiths’ art as craftspeople and their ability to meld this skill with technology, creating a work of art that could not be created by man alone. The piece embodies both the artistic design and engineering skill that one expects from a collaboration between Rolls-Royce and Fabergé, and has probably the most complicated opening of any Fabergé Egg to date. 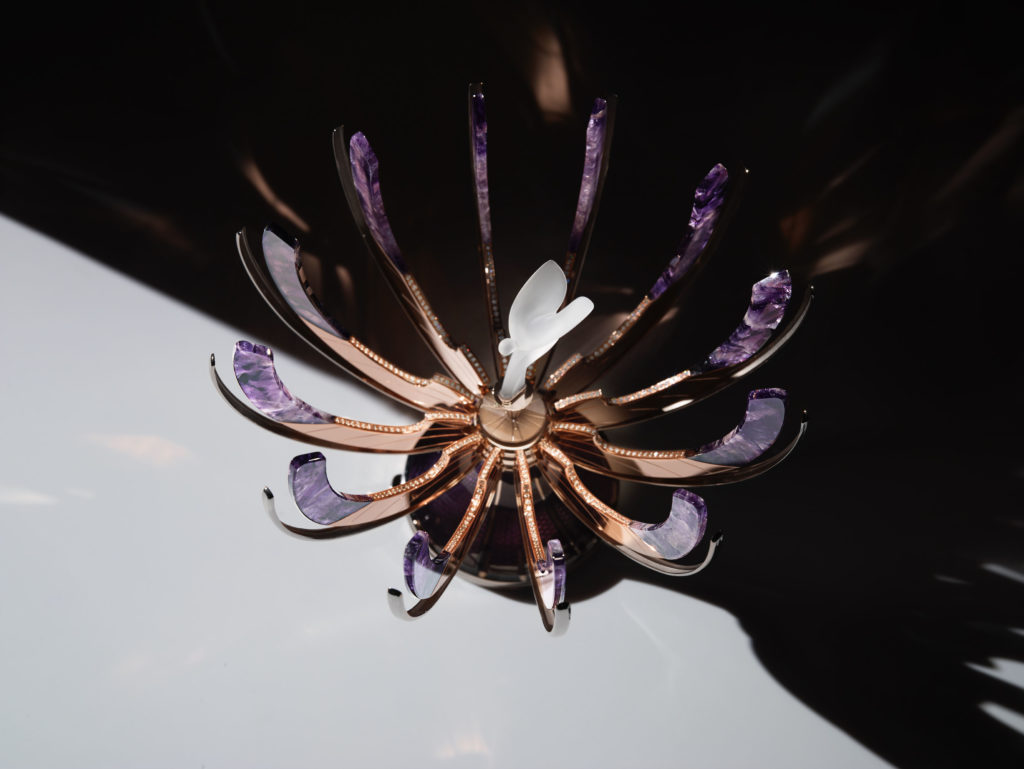 Sean Gilbertson, Chief Executive Officer, Fabergé said, “A unique moment in both our companies’ history, the creation of the ‘Spirit of Ecstasy’ Egg represents the meeting of two masters of unrivaled quality and design, showcasing two globally recognized symbols – the Fabergé Egg and the Spirit of Ecstasy.”

Josina von dem Bussche-Kessell, Business Development and Global Sales Director, Fabergé added, “Two years in the making, we are very excited to unveil this special piece to our clients and partners across the globe together with Rolls-Royce Motor Cars and are proud to continue making history by creating bespoke and unique pieces such as this. The ‘Spirit of Ecstasy’ Egg marks a demonstration of the reputation that Fabergé proudly carries today.”

Fifty Imperial Easter Eggs were created for the Russian Imperial family between 1885 and 1916. These creations are inextricably linked to the lives of the Romanov family. Ten Eggs were produced from 1885 to 1893 during the reign of Emperor Alexander III; a further 40 were created during the rule of his dutiful son, Nicholas II, two each year – one for his mother the dowager, the second for his wife. If we explore the great archives of Rolls-Royce, we find that Tsar Nicholas II was indeed also a patron of Rolls-Royce Motor Cars.

The ‘Spirit of Ecstasy’ Fabergé Egg will be premiered at the House of Rolls-Royce in Goodwood, West Sussex, England, to a host of distinguished guests and venerable patrons of the marque on October 23, 2018. The Egg will then be on public display in Fabergé’s London window this Christmas.